Alcohol and Bodybuilding: Can Raising a Glass Lower Your Gains?

Alcohol and bodybuilding aren’t two words you usually see together. But many bodybuilders like to enjoy the odd brew or bourbon to kickback. Is that a crime? No! Cheers. Will it impact your gains? The truth is, it could… 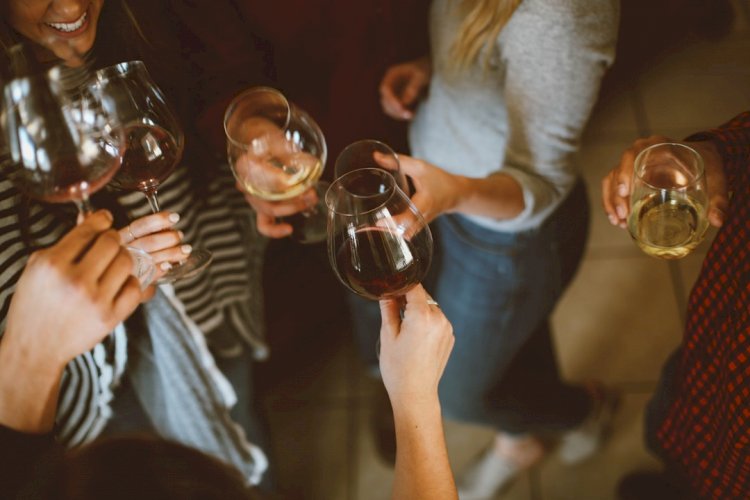 Alcohol and Bodybuilding – The Facts

The whole booze vs bodybuilder debate isn’t so black and white. But there are some cold hard alcohol facts when it comes to your physique. Let’s sink a round or six of the science to see what’s what…

Many men and women know that drinking can hold back their gains. Yet, not all of them know why. According to researchers it’s all down to inhibited protein synthesis. This is the process your body goes through to turn amino acids into fresh muscle, aka gainz.

The test subjects then consumed a whey protein shake, alcohol co-ingested with protein, or carbohydrate and alcohol, immediately post-workout. This was then repeated four hours post workout. During this process muscle biopsies were taken at rest, two hours after exercise, and then eight hours out.

At the end of the study the team of researchers saw muscle protein synthesis increased at rest in all groups. However, compared to the whey protein group, all those who drank alcohol saw a reduction in MPS. Therefore, the researchers said their data demonstrated that alcohol reduced rates of MPS after concurrent exercise [1].

Simply put, alcoholic beverages slow down muscle growth. So maybe cut back on the cans if you’re trying out for the swole patrol.

2. Alcohol has no nutritional value

When we talk about macros, we’re all about protein, fats, and carbs. But what a lot of bodybuilders forget is the fourth macro. Yes, that’s right, alcohol – at seven calories per gram too.

The possible issue with alcohol is that it holds no nutritional value. Whereas protein provides amino acids and fats cholesterol for testosterone, alcohol isn’t as useful. While yes it provides a hit of energy, but is that really what you want? Not always.

Another possible problem with drinking alcohol is that your metabolism prioritizes it over other macros. It essentially burns through whatever booze is in your system first before anything else. Just to put that into perspective alcohol sits at seven calories per gram, whereas carbs come in at four.

You have to blast through seven calories per gram of booze before you even start burning that tipsy slice of pizza.

Not only that, but research suggests that alcohol consumption can impair nutrient absorption [2]. This happens because drinking decreases the number of digestive enzymes available and causes damage to cells inside the digestive tract.

This means too much alcohol can restrict the absorption of important amino acids from protein. Not just that, but other vitamins and minerals essential for a healthy physique too. While this might be bad for regular people, it could be worse for bodybuilders.

Try to limit how much alcohol you drink throughout the week and at weekends. Moderation is your muscles friend here.

Also, if you’re kicking back with your favorite tipple post-workout, leave it until after you’ve had a refeed. Allow time for your after-session food to be digested first.

What a lot of bodybuilders find shocking is how alcohol can affect testosterone. But will a few brewskis on the weekend turn back the hard work of priming your hormones? Again, it depends on quantity.

The reality is that one or two tins to end a Saturday night probably won’t hurt much.

Drinking in excess though is a fast way to empty the testosterone tank. You can wave goodbye to the sweet taste of gains too while you’re at it.

Firstly, boozing is a big proponent of unwanted body fat. With an average can of beer boasting 150 kcals you’re gonna leave any kind of calorie deficit dead in a ditch.

Instead, you’re likely to lift the lid on a big-ass surplus by the end of a heavy session. This is especially true if you’re the sort of guy who likes to mix cheap alcohol with sugary mixers. Not only do you have the calories from the booze, but whatever soda you’ve crammed in there too.

As we know, these excess calories will probably be stored as adipose tissue. Bodybuilders worldwide are well aware that any additional body fat can negatively impact testosterone [3]. So, put two and two together, bro.

But, what can you do?

Try to go for lighter beers, top-shelf spirits or high-quality wine. The former will keep the calories lower while the other two help you pace yourself as they’re richer.

Just try to stay away from the cheap and nasty mixed drinks. Sugar is packed into this stuff to make it taste better.

But what about direct damage? According to one study published in the journal Alcohol, it’s real.

The researchers involved got eight men to drink 1.75 g of alcohol per kilo of body weight. Then, they set about testing their testosterone levels.

The amount they drank is actually quite a lot more than a single swift bourbon. But we’re studying excessive drinking here, not a sensible nightcap.

Testosterone levels dropped significantly for as much as 12 hours in the binge drinking group. It then took the group as long as 24 hours for their test to return to baseline [4].

What’s even scarier is there’s a separate study from a whole different team of scientists suggesting similar findings too [5].

Okay, so no booze ever again?

Not at all, brother. No need to set fire to the liquor cabinet.

The simpler solution to stopping these issues is just respecting your physique. Save alcohol for special occasions, not every day consumption.

Bottom line – too much booze can tank your testosterone levels. Drink moderately to keep them safe.

4. Beer can also influence estrogen too

Alongside alcohol beer contains another thing bodybuilder’s need to know about – phytoestrogens.

Ever wondered why lots of beer loving bros get a matching keg-belly and man boobs? Let’s not even get started on brewer’s droop… Also known as erectile dysfunction.

It’s not fashion we can assure you – it’s the feminizing effect of hops!

Yes, those tiny little plants that make beer taste so great can be a bodybuilders worst nightmare. Women who work in hop fields have to wear protective clothing just to stop it messing up their menstrual cycle.

Unless you’re really stressed out by the idea of estrogen just try to limit your beer. When drinking, go ahead and ask for a fine wine or high-quality spirit instead of pounding the IPAs. Not only are they usually lower in calories, but they’re not brewed with man-boob popping hops.

5. Drinking might slow down recovery if doing something new

As a bodybuilder you don’t shy away from a hard session. You also understand the importance of maximizing your recovery too.

Soreness is always at hand to hold you back if you let it.

But did you know that recovering from a workout might take longer if you celebrate too hard afterwards?

A group of researchers from Massey University in New Zealand found that drinking post-workout made their athletes sorer up to 72-hours afterwards. Some test subjects even reported effects after seven days.

The protocol for the study was pretty brutal too, as each athlete had to perform 300 maximal eccentric quad contractions. That’s 300 reps!

After the intense leg session, the test group drank 1 g of alcohol per kg of body weight, while the control group downed juice [6]. As we just mentioned the alcohol group felt significantly more impact from DOMS than the Sunny D squad.

What’s the bottom line then? If you’re going for an intense workout, maybe reign it in a little at the bar.

Also remember that the 300 contraction quadzilla session the test subjects faced is by no means a normal session. The researchers compared it to an insane leg day after returning from a six-month layoff.

6. But regular, non-novel, and familiar exercise is probably fine

Having a well-deserved beer after lighting up leg day won’t leave you with DOMS for days.

But what about going over the drink driving limit? In fact, recent research from 2018 says it shouldn’t have much impact at all.

Put simply, if you’re used to the training, you won’t necessarily be hit hard by the booze [7]. This means that bodybuilders who are familiar with the movements and muscle damage they’re doing might not need to worry.

There’s also research from New Zealand that backs this up too. It turns out that the same guys who carried out the 300-rep quad burner study also did something similar. However, this time, it was with seasoned rugby players who are notoriously good at drinking.

The results showed that the rugby guys weren’t wiped out by a bout of alcohol consumption at all [8]. Apparently, leading researcher Matthew Barnes credits this to their familiarity with the game’s movements. The fact that the players were at the end of a season meant they were well conditioned to whatever it threw at them.

There are two things you can always do to speed up recovery. One is stay hydrated and the other is to get enough sleep.

Unfortunately, alcohol actually alters both in a bad way. But as always, we’ve got a few tricks up our sleeve to balance things out a little.

First things first, make sure to drink enough water. If you’re dehydrated, you’ll restrict the flow of nutrients to your muscles and consequently slow recovery. Alcohol is a diuretic, so it makes you lose bodily fluid at a higher rate than usual.

When out at the bar or even just chilling watching Netflix, go one-for-one. For every alcoholic beverage you sling down, match it with a drink of water. This will help you stay hydrated once you start hitting the bathroom and will reduce how bad of a hangover you get [9].

Next, sleep in bro. Drinking booze disrupts REM sleep even though it often makes you feel relaxed and drowsy.

These disruptions can make you feel more lethargic and lacking in energy the next day. What do you do? Grab an extra hour shut-eye to blunt the effects.

Final word on alcohol and bodybuilding

Being a bodybuilder requires skill, dedication and drive like nothing else. Life in the realm of physique development was never going to be easy. As we say – the iron doesn’t lie.

Building muscle takes a lot of energy to perform intense workouts. Your nutrition must be set up and executed well to support your efforts too. But does that mean you can’t enjoy alcohol? No, it doesn’t.

Moderation is the key to success. One or two drinks on the weekend won’t undo the previous six days of hard work.

It might be just what you need to relax and unwind with friends or family. After all, is it really worse than most of the cheat meals we devour? Absolutely not. Just keep in mind that alcohol is empty calories, unlike a tasty, towering burger.

The problem arises when we drink in excess. So, monitor your intake and be truthful with yourself about the type of drinker you are!

If you can handle a few and be happy, then do it. But if you can’t say no and overdo it, own your business and abstain. Find the right balance for you and your own bodybuilding journey.

The Zone Diet: A complete guide

TestoFuel VS. Testotek v2.0 Review: Which Is the Best Testosterone Booster?