She’s one of the most well-loved fitness models out there, but how much do you really know about Michelle Lewin? We’ve rounded up 20 interesting facts you probably didn’t know about her. Read on to find out more. 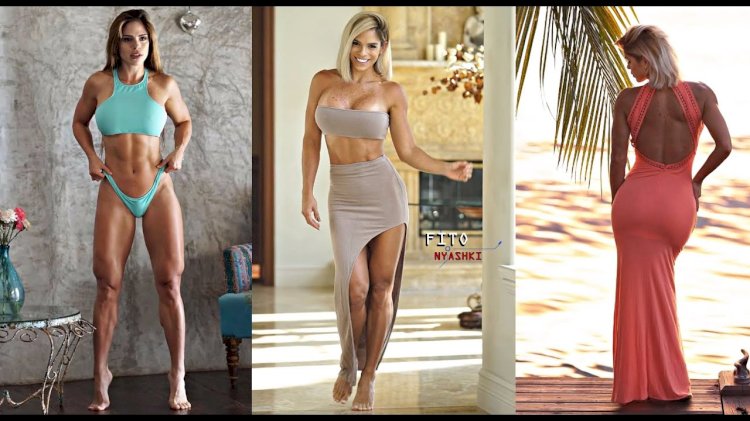 The fitness supermodel was born in Venezuela and came from humble beginnings. She didn’t know her father, and her mother separated from her stepfather when she was 14, leaving them with nothing.

“Just an apartment without any furniture and hundreds of cockroaches. That was a very traumatic experience, and we both lost a lot of weight since we simply couldn’t buy food,” she said.

Lewin didn’t let the fact she’s only 5’4” stop her from trying her hand in the fashion world. She traveled to Milan, Rome and Barcelona to talk to the fashion agencies.

“They were plain mean,” Lewin said. “They saw the freckles on my chest and were disgusted with them and told me they had to be removed.”

Even as a famous fitness model, Lewin says the agencies probably still find her disgusting, but she doesn’t care.

“I’m so happy I’m not a part of inspiring young girls to starve themselves,” Lewin said.

3. So you want an autograph?

If you want to meet her, you’re going to have to get in line.

Lewin says when she attends a large expo she needs about five security guards to make a ring around her when she walks through the crowd.

“If I’m signing autographs, I just need the lines to be very organized so everyone waits their turn, and I can spend time with one person at a time,” she said. “I don’t travel with a bodyguard, and when people stop me in the street, they are usually super nice and friendly.”

Even Will Smith wanted a selfie. His wife Jada Pinkett-Smith is a fan.

4. She’s not naming any names but…

After shooting to stardom, Lewin learned not everything that glitters is gold. She was initially flattered after being asked by a famous R&B artist to be in his music video.

“I found out that he wanted to ‘try me out’ first. It was a big thanks, but no thanks. No names, but I can tell you this… What a jackass!” she said.

After a whirlwind romance with Swedish-born bodybuilder Jimmy Lewin, Michelle was married in 2010. Today Jimmy is her personal trainer, agent, social media manager and best friend. Can you say #RelationshipGoals?

These days Lewin can’t keep her hands off her hunky hubby.

“I feel way more comfortable now. And then it’s much more fun,” she said. “And girls, well, they like to have fun.”

The social media darling has nine million Instagram followers and isn’t worried about the up-and-coming talent threatening her business model.

“More girls are doing the same as I do. But luckily, most are out of ideas and do exactly what I do,” she said. “And no copies have ever become better than the original.”

Lewin eats a very clean diet consisting of carbs only in the morning and at lunch followed by lean proteins and vegetables in the afternoon. But on Sunday, it’s no holds barred.

“Every Sunday I eat whatever I want which is usually all the pizza and pasta I can get hold of!” she said.

10. She wasn’t always this ripped

With the help of her now-husband, Lewin transformed her body—losing the fat and gaining muscle. In a few years she went from 145 pounds to a svelte 120 pounds. According to her Twitter page, her measurements are a perfect hourglass 36-25-36.

Inspired to drop a few pounds too? We’ve found a quality fat burner can give us an edge during a cutting phase. We’ve reviewed some of the best products on the market, so you don’t have to.

Read on for 10 more tidbits about your favorite fitness model.

11. She has mixed feelings on posing naked

Lewin regularly poses in tiny bikinis and booty shorts to showcase her hard-earned body, but she says nudes aren’t her style.

Kim Kardashian breaks the internet every time she puts her assets on display, but Lewin says it’s not necessary.

“Not sure why they do that. They don’t need it, so I really can’t figure out the point,” she said.

Lewin was goaded by Venezuelan Playboy for two years before she agreed to be the cover model for the January 2012 issue.

Although she doesn’t regret posing for the iconic men’s magazine, Lewin says being asked for nudes is the worst part about modeling.

“If you’ve been in Playboy, ALL photographers want nudes,” she said.

Since then, she has posed for Bodybuilding.com’s annual Bodies of Work: Volume 2. These artistic nudes showcase her physique, but are less revealing than Playboy.

When Lewin isn’t earning her hard body, she enjoys watching a good film. Her favorite movies include Iron Man and Top Secret with Val Kilmer from 1984.

Want a body like Lewin’s? You’re going to have to work hard for it. Lewin trains six days per week twice per day.

“I do cardio in the morning for 45 minutes and weights every evening,” she said. “I do all muscle groups once per week, but I focus mostly on glutes and abs, which I train twice a week.”

“I really don’t like to take rest days, but I do once a week,” she said.

The Latina cover model’s first language is Spanish, and her nickname is “La Cuerpa” A.K.A. “the body.” We can see why.

Lewin is an IFBB Bikini Pro. Her tips for becoming a successful bikini competitor? An hourglass figure, learning how to pose and a beautiful look in general.

“High factors are a wasp waist and nice, round booty,” she said. “You will also need to know how to pose, walk and move. Think that you will seduce your partner, but your best friend is watching, and she cannot find it vulgar.”

“I have said I’m going to have children ‘in five years’ for the last six years [laughs], and I guess I still stick to that,” the 30-year-old bombshell said. “I’ll be honest, I am very concerned about the changes that occur with pregnancy since my body is my trademark and my business.”

In 10 years, Lewin can see herself sitting back, financially independent, at a beach house with her two five-year-old twins.

Lewin can often be spotted walking her schnoodle Micho (a cross between a schnauzer and a poodle) in Miami.

When Lewin’s social media began to take off, her primary audience was men.

“In the beginning, it was pretty steamy fitness pics that I was posting, and I could see that it was mostly guys liking it,” she said. “So I changed the thongs to fitted yoga pants and the push-up bras to sport tops, and the girls started to actually like me.”

Michelle is thankful for her female followers and loves to inspire them through her fitness pages.

“I never thought I would get to that point, especially since I’m an ex-Playboy cover model. But girls! Thanks! I love you! You’re the best! she said.

“If I only have 15 minutes, I do lunges. Fifteen minutes of strict lunges will do you very good,” she said.

Lewin finds a way to work out, no matter where she is. She doesn’t “bulk” and maintains a lean, camera-ready figure year-round. No ifs, ands or “butts” about it!

Alcohol and Bodybuilding: Can Raising a Glass Lower Your Gains?