Burning fat isn’t just about going hard in the gym, bro. What you put on your plate is equally important if you want to get shredded. Here are eight foods men should throw in the pan to burn fat, fast! 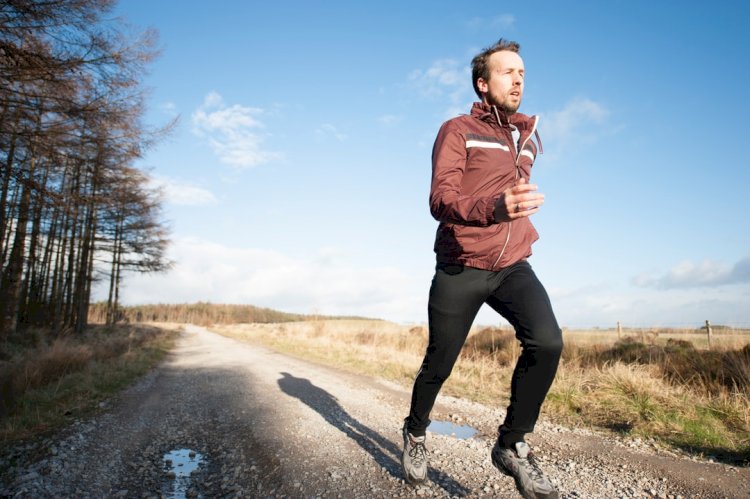 Men love chili peppers. It’s instant glory points with the bros for eating the hottest and they provide a kick to any dish. But, did you know they turn the heat on your fat stores too?

Chili peppers contain an antioxidant compound called capsaicin. According to numerous studies; this spicy critter can help you feel fuller and burn more calories, all in the same bite.

Because capsaicin increases sensations of fullness, it makes it much easier to prevent overeating. When eating in a calorie deficit it can also help decrease desire to eat after dinner too. When it comes to burning fat, bro, all your efforts are wasted if you can’t stop eating [1].

While all of this is awesome for keeping your diet on track, there’s more. Research into the powerful thermogenic effect of capsaicin reveals that it ramps up your metabolism [2].  So, just by eating chili peppers alone you’ll increase energy expenditure and fat oxidation [3]. 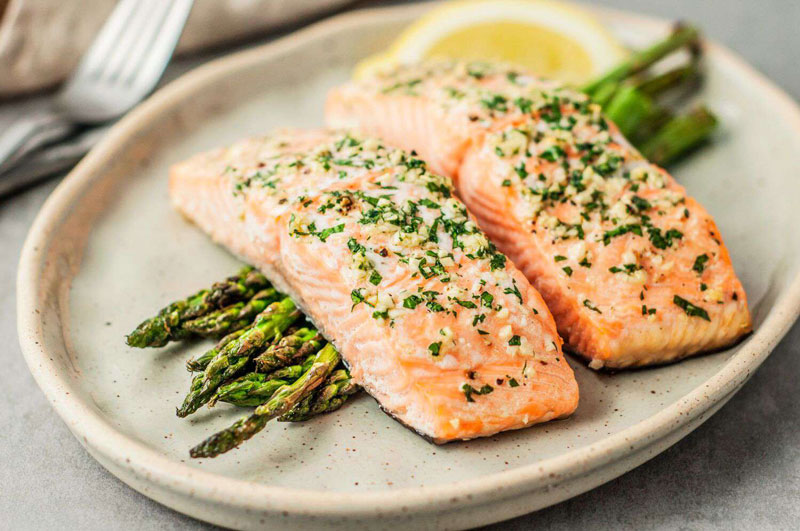 According to one six-week controlled study of 44 adults, the ones who supplemented with fish oil supplements lost 1.1 lb on average. Plus, they also showed a drop in the stress hormone cortisol, which is linked to fat storage [5].

Key point: Fatty fish such as salmon are rich in high-quality protein and Omega-3. Omega-3 is a healthy fatty acid associated with reduced inflammation, lowered risks of heart disease, and increased fat loss.

The day doesn’t start until we sink that first cup. Doing so might be a winning way to start the morning if fat loss is your goal too.

That’s because coffee contains caffeine, a compound that’s commonly enjoyed by people for its physical and mental benefits. According to The British Nutrition Foundation, caffeine is the most consumed psychoactive substance in the world.

Anybody who’s enjoyed a mug or two will know what we’re talking about. However, have you ever stopped to think how that positive energy charge influences your fat burn?

One study into the compound showed that those who consumed it 60-minutes before exercises boosted their burn. Not only was their RPE less, but they bolstered their fat blitz by almost 50%, while exercising for 17% longer than the control group [6].

Key point: Coffee contains caffeine that’s proven to increase energy expenditure. Alongside this fat-burning benefit, it can also improve both physical and mental performance. Try a cup 30-minutes before training for a powerful pre-workout kick.

MCT-Oil has made waves among diet nuts and athletes alike for its fat burning benefits. However, many men still refuse to believe that the saturated fatty acid can be good for them.

MCT is an abbreviation of medium-chain triglycerides. Unlike long-chain fatty acids, MCT only contains between six or twelve carbons, meaning it can be digested much quicker.

Rather than spend ages travelling through the lymphatic system MCTs fast-track straight to the liver. Here they’re metabolized into ketones that can be used for instant energy.

What’s even better is that various studies show MCTs may speed up the metabolism, while helping reduce hunger and maintain muscle mass in dieting men [7] [8].

Prominently included as one of our best breakfasts for weight loss – eggs are a nutritional powerhouse. Featuring a full array of healthy fats alongside bioavailable proteins, they’re awesome for any man looking to lean up.

One piece of research into the power of eggs showed that eating two for breakfast enhanced fat loss. To find this out, the team of scientists had overweight and obese participants who were on a weight loss diet eat either eggs or bagels first thing.

After eight weeks, those who ate eggs showed a significant 61% reduction in BMI compared to the bagel group. Furthermore, the egg diet also promoted 65% greater weight loss and a 16% greater reduction in body fat [9].

On top of their fat burning breakfast benefits – eggs also stave off hunger. Their modest amount of protein per serving helps to increase your feeling of fullness, meaning you’re less likely to snack on junk foods throughout the day.

Key point: Studies have shown eggs make the perfect breakfast for a man on a mission to get shredded. Our tip – enjoy them in a scramble with capsaicin rich cayenne for a double fat fighting shot.

Not all steaks are made equal, bro. Grass fed steak is much higher in CLA (conjugated linoleic acid) than it’s grain-pumped counterpart, something that can bolster lean mass while dropping body fat [10].

Plus, digesting food requires your body to burn energy. Right at the top of the pile is protein, which can be found in abundance in a thick grass-fed beef steak, at 19.5g per 100g.

According to Dr Wycherley from The University of South Australia, a high-protein diet is the way forward for fat loss. “Our results showed that people who consumed a high protein diet achieved better weight loss. The studies went for an average duration of 12 weeks and over this time participants who followed a high protein diet lost 790 g of additional body weight compared to those consuming diets with standard protein amounts,” he says [11].

The takeaway? Pile your plate with protein-dense foods to speed up your fat burning and weight loss. Here are five healthy steak recipes every bro needs for their gym life.

Key point: Grass-fed steak is a food rich in protein and CLA, both of which have been linked to positively impacting fat loss in men. Furthermore, grass-fed steak is high in iron, an essential part of blood production and energy metabolism. 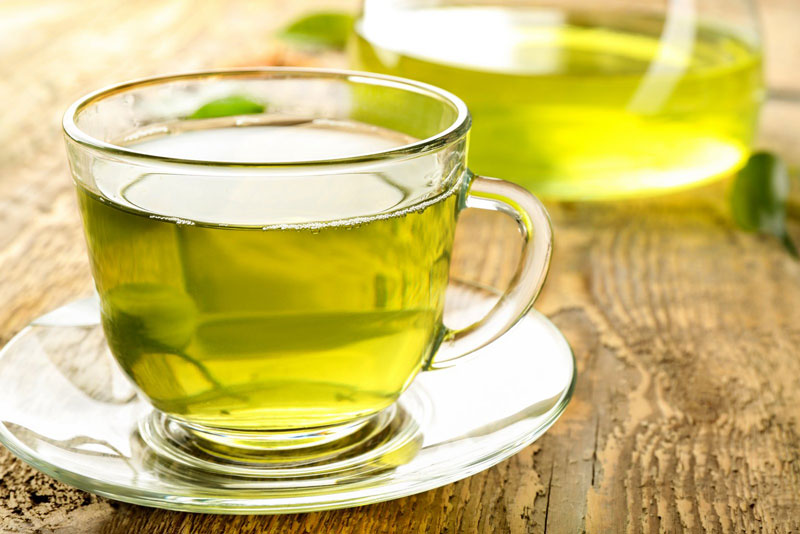 If you thought green tea was just for zen health freaks think again. It’s the ideal drink for men looking to strip back unwanted body fat.

Firstly, green tea contains a modest amount of energy-inducing caffeine. If you’re still with us from earlier, you’ll know how this compound can take you from chubby to chiseled. However, unlike coffee, this kind of tea contains L-citrulline, which helps calm potential caffeine jitters for a smoother ride.

Secondly, green tea is a great source of epigallocatechin gallate (EGCG). Some studies out there indicate EGCG accelerates fat burning and reductions in belly fat [11] [12].

Still not convinced to give green a try? How about the fact that another study suggests that the mixture of caffeine and EGCG has a positive effect on weight management? Yes, that’s right, not only will green tea help you shed fat, but keep it off too [13].

Key point: Green tea contains a potent fat-burning mixture of caffeine and EGCG. Not only can it elevate energy levels but drinking it regularly can help you keep the weight off too.

According to a 2015 study published in the Journal of the American Heart Association, people who ate nuts instead of carby snacks may have lower levels of abdominal fat [15].

This may be due to nuts being rich in satisfying monounsaturated fat. Unlike simple sugar-filled snacks like candy, a handful of nuts will kick hunger to the curb for a lot longer, leading to less over-eating and constant grazing.

For us men – the best nuts to crunch are almonds, walnuts, and brazil nuts.

Almonds contain the amino acid L-arginine that helps you burn extra fats and carbs when you work out. Our suggestion? Throw a handful into your kit bag for a pre-workout snack.

Walnuts are also tiny yet tasty beasts for maintaining healthy cholesterol levels. Don’t raise your eyebrows just yet, bro. This is the kind of fat is essential for optimizing testosterone production which, at its peak, is linked to increased lean mass and lower body fat.

Finally, we have the creamy brazil nut. This guy is one of the best places to find selenium, which is an integral mineral associated with maintaining a healthy metabolism and boosting the immune system. The fact that selenium regulates thyroid hormones, which dictates how your body uses fat, cannot be missed.

Key point: Swap out your sugary snack for a handful of tasty nuts. They’re full of minerals and nutrients linked to fat loss while packing themselves with healthy testosterone boosting fats. Just remember that nuts are a high-calorie food and can easily be overeaten.

Burning fat is a fundamental part of revealing a hard, chiseled frame. Stripping back layers of unwanted body fat allows the muscle to come to the surface and be the forefront of your physique.

However, doing this takes hard work in the gym and a bulletproof strategy in the kitchen. With these eight ingredients, you’ll be able to support your process and unveil lean mass faster than without.

To really accelerate your fat loss goals, aim to eat in a calorie deficit of around 10-20% to encourage your body to tap into unwanted body fat for energy. The result? Lower levels of body fat and unleashed shreds.

Furthermore, no fat loss mission is complete without a solid workout plan. Forget long runs on the treadmill though, focus on resistance training instead. Lifting weights inflicts a double-blast on fat stores by scorching calories and building powerful lean mass to replace fluff.

11 Reasons Why Deadlifts Are So Good For Your Health!

Why You Should Start Adding Push-ups to Your Workout Now!

The 5 of Bodybuilding’s Biggest Myths Debunked

Ditch Your Running Shoes: How to Get Running Fit Without Actually Doing...

5 Acupressure Points for Gas and Bloating