Quick and Easy Ways to Lose Weight With Portion Control

If your physique is currently carrying more fluff than an alpaca hair-stuffed pillow you need to read this article. Because portion control could be your easiest route yet to slaying body fat and develop a rippling set of abs in no time at all. Whether you’re coming off a bulk or just let your standards slide over the last few months, it’s good that you’re here. It shows you’re ready to make positive changes and go from fat boy to pussy-pounding, beach-ready bro in a matter of weeks. We’re here to help you get there. You already know that a calorie deficit is the key to fat loss. But it’s how you achieve it that’s your key to success. And that’s where portion control comes in – a simple, effective, manageable and easy way to slash calorie intake and get jacked. This is how ... 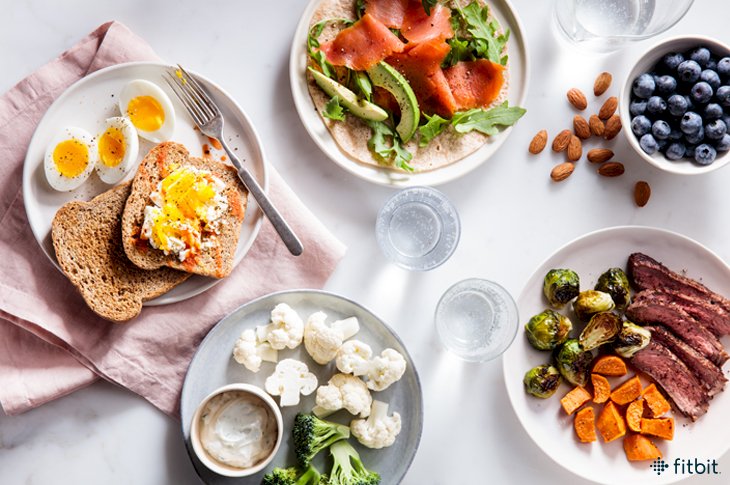 Calories are either your best bud or your most hated enemy.

As a bro wanting to pack on monstrous muscle mass you need to shovel them down like a heavyweight classic bodybuilder shovels down his orals.

But when the cutting season comes around you have to ration those muthaf*ckers like bacon and butter during the forties.

A Calorie is a unit of energy. More specifically the amount of energy needed to heat a gram of water by 1 degree Celsius.

When we talk about food calories we refer to kilocalories – the energy needed to raise the temperature of a kilo of water by 1 degree Celsius.

Why are you telling me this?

As a unit of energy, calories fall within the rules of thermodynamics. In other words, energy can’t be created or destroyed, only transferred from one state to another.

If you remember that from high school biology you’re doing well. We can only remember using Bunsen burners to set fire to sh*t.

Calories in vs calories out dictate weight gain or fat loss

Much like a seesaw, energy coming in falls on one side and energy burned off on the other.

Calorie balance is a matter of maths. It’s just the balance of numbers.

Not the kind of mathematics that needs a team of nerds and a supercomputer to calculate, just simple addition and subtraction.

When you eat food your body takes what it needs from it. It absorbs the vitamins and minerals it requires, as well as the calories stored in the three macronutrients – carbs, protein and fat.

Whether you burn fat or store it as love handles and bitch tits depends on the balance between energy input and expenditure:

How do you actually use calories throughout the day?

The reason we say ‘burn’ calories comes down to how energy is measured using calories as a tool (remember, it’s the measure of heat increase).

Every second of every day your body utilizes energy to function. Whether you’re asleep, nailing a 1RM, smashing a chick or taking your favorite grandma out for shopping.

Here’s how your body burns energy each day:

As long as the total of these calorie-burning activities outweighs the amount going into your body you’ll burn stored fat.

Some medieval bros slaying calories to get lean AF

What Is Portion Control and Why Is It Important?

It’s tough out there when cutting season jumps. All of a sudden you’ve got only a few weeks to etch out your muscle striations and show off that mass you’ve been lovingly cultivating over the winter. What was once a happy journey of endless carbs and a river of protein shakes disappears overnight.

It stops you from overeating. Portion control doesn’t mean eating tiny amounts of food that would leave a dwarf hamster malnourished. It just means eating enough to satisfy hunger… and nothing more.

There’s nothing fancy about portion control. It’s not some voodoo sh*t like keto supplements, toxin cleansing or some African herb that promises to help you grow a foot taller (and we’re not on about your height).

It’s not about eliminating food groups, massively restricting the things you like or adding dumb as f*ck shakes to your diet.

Portion control is the hard-working, honest dude that doesn’t get the limelight, but really does make a difference.

Control your portions and get ripped bro

Let's add the idea of calories to portion control. We know that burning off energy helps to create an energy deficit. So does reducing the amount you eat.

By calculating portion control you’ll able to monitor your deficit much easier. Eating specific portions makes it easier to track if you’re using a calorie app, and eating smaller amounts reduces the chances of you overeating.

Imagine this scenario – you’re not losing weight. You know that you need to skim 300-500 calories off your daily total in order to achieve a moderate deficit once again.

If you’re a true bro this might be a tough decision. You love your food… but hopefully, you hate cardio more and would rather avoid it at all costs.

Portion control helps you manage the calories coming in, so the calories out don’t need to be as vigorous. A study published in the Journal of Health and Psychology found that being mindful over portion sizes helped to control food intake.

And that leads to fat loss.

Those that were mindful of portion sizes ate on average 34% less food than a control group who could eat however much they wanted to.

If you’re looking to just put the tip in, this is what you need to know about portion control.

Here are the best ways to use lose weight with portion control:

#1. Trick your brain with a smaller plate

Using a smaller plate means you can’t lump endless food on your plate like a scene from Close Encounters of the Third Kind.

A Cochrane review recommended that adults should dump their jumbo plates in favor of a smaller ‘food vessel’. That’s because when offered larger-sized portions, packages or tableware than when offered smaller-sized versions, participants always over-ate.

You’ve still got to use your initiative though. A smaller plate means sh*t if you lump your food sky-high.

“If only I’d used a smaller plate”

Using your hand to estimate portion sizes might seem like a dumb idea. But it does help to keep you conscious of how much you’re eating.

You ever heard the saying “more than a handful is just a waste”?

Yeah we don’t agree either. But when it comes to food and not huge tiddies, they may have point.

Firstly, check the size of your hand compared to a serving cup. Unless you’ve got freak-like shovels for hands, they should be pretty similar. If not, adjust servings accordingly by using amounts slightly smaller than your hand, or cutting some of your fingers off. Joke.

Here’s how you use your hand to get perfect portion sizes:

#3. If in doubt, more protein and vegetables

If your plate is looking empty but you’re not sure what to do, add more lean protein and vegetables.

Protein is the most satiating nutrient there is, having a magical ability to keep you feeling fuller for longer than both carbs and fats. It boosts muscle mass and is great for maintaining lean mass during a weight cut.

Vegetables are nutrient-dense, meaning you maximize vitamin and mineral intake in hardly any calories at all. They’re also full of water so help to keep you hydrated and full of energy.

#4. Prepare your meals in advance

If you don’t plan your meals you could be left high and dry when it comes to food choices.

And even if you think you’re measuring out the right amount of chips, pasta and convergence food, that tantalizing half eaten bag on the seat next to you will soon get the better of you.

The occasional meal out is great for motivation and morale. But to slide into the DMs of single-digit body fat you’ve got to control those portions bro.

It doesn’t have to be complicated. You just need a few containers, some weighing scales and a bunch of clean, healthy foods.

It’s easy. It’s convenient. And in no time at all it’ll get you ripped as fuark.

If you’re unsure where to start check out our meal prep tips for beginners for some simple and no bull ideas on meal planning.

No, we’re not talking about synthol. That’s some nasty sh*t that’ll leave you looking like a circus freak balloon boy. We’re talking about cooking oil such as olive, coconut and avocado.

In moderation, these oils are great for increasing the primary male hormone testosterone, because all androgen hormones are produced when fat converts to steroid hormones in your cells.

But oil is high in calories. Every gram of fat comes crashing in at 9 kilocalories per gram. That’ll soon add up when you’re trying to get ripped, jacked and shredded.

Use it sparingly… a drizzle at best.

If all this talk of portion control has left you hungry for more, check out these articles to get you shredded…

Tips for sticking to your diet plan without having diet mood swings.