Washboard abs, lean legs, and vascular arms may be the hallmarks of any shredded bodybuilder, but just how much fat can you lose before you compromise your health? 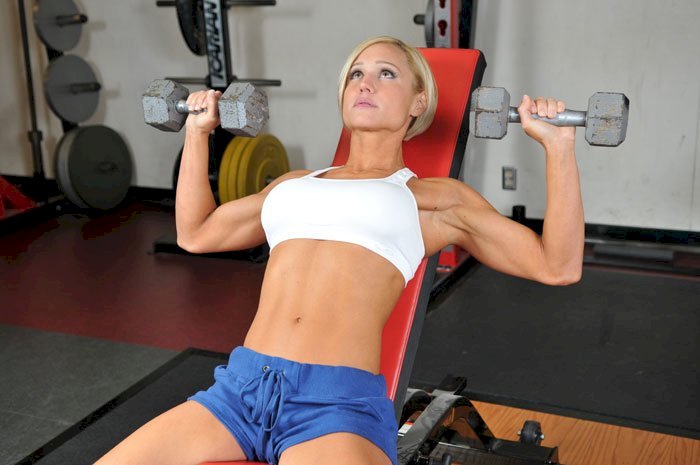 What does this mean? Women need more fat than men for basic physical and physiological health—not all fat is bad fat! Women need a certain amount of fat for ovulation. You may know a woman who has lost her menstrual cycle after getting too lean.

Many bodybuilders diet down or even maintain numbers well below this range on a regular basis, but it is important to know the difference between training for aesthetics and training for health. Of course, body fat is only one measure of health. To imply that anyone who has a six-pack and eats well is “underfat” or “unhealthy” is a stretch.

The same goes for men, however, Andreas Munzer was one of the world’s top bodybuilders and claimed to boast the hallowed “zero percent body fat” before his death in 1996, which was largely thought to be related to the excess in diuretics he consumed.

The ideal body fat for aesthetics is even more subjective than the ideal body fat for health. The majority of comments on Dobrinina’s shredded body were anything but complimentary. Users called her body “disgusting” and “ugly,” questioning whether she was even a woman.

On the other hand, lean yet feminine physiques like fitness model Michelle Lewin are idolized in both the bodybuilding world and by us mere mortals. Lewin self-purported her body fat percentage to be 9.9 percent on her Twitter account (although this estimate is probably a little low).

Body fat percentage can be estimated several different ways, including the use of calipers and bioelectrical impedance scales, but the margin of error can be up to five percent! Hydration levels and food intake can be enough to skew the test.

The hydrostatic dunk test is believed to be one of the most accurate tests. The subject must submerge themselves in water and blow all of the air out of their body—probably not a test you’re going to do on a regular basis.

Read on for a revolutionary new way to measure your body fat.

The Naked 3D Fitness Tracker will use similar technology to hydrostatic dunking in the convenience of your own home. This mirror/scale will allow the user to upload a 3D body scan to their smartphone accurately recording their body fat percentage, measurements and weight. This supercomputer is available for pre-order and will begin shipping in March 2017. You’ve probably heard the term “skinny fat.” Just because someone is a healthy weight per BMI (body mass index) charts doesn’t mean they are healthier than an athlete with a higher BMI due to lean muscle mass. Dig a littler deeper and you will find the most dangerous type of fat (visceral) is found around the organs and is linked to diabetes and heart disease much more than BMI. This type of fat can only be reduced through diet and exercise. Sorry Kanye, lipo isn’t going to cut it!

So although women may not appreciate the extra fat they tend to put on in the hips and thighs, it’s not dangerous to their health like the fat surrounding their organs in and around the waist.

What does this all mean? The tradeoffs for achieving a “healthy” body fat range are well worth it. You will experience better health, more energy and help ward off diseases including heart disease and diabetes.

When it comes to getting super lean? It’s up to you to determine whether the tradeoffs are worth the six-pack. Being super lean has almost nothing to do with being healthy! Pushing your body fat into the low teens for a woman goes against biological cues.

For many, this means exercising while exhausted, ignoring your desire for food and relying on intense focus and dedication. Many women who finally reach these levels often decide the lifestyle isn’t right for them.

POP Pilates creator Cassey Ho says she achieved her competition bikini body by working out for four hours per day while only eating 1,000 calories per day.

“It was one of the most terrible times of my life, because it actually spiralled me into a type of eating disorder,” she said.

Ho says she now realizes it was a mistake. She was easily irritated, snapped at people and felt cloudy in her head.

But the comments on the photos she was posting motivated her to keep going. People wanted to know how she was doing it and told her she looked amazing.

“You’ve got to listen to your own judgment,” Ho said.

After the bikini competition, she admitted she was happy the whole thing was over and says what she did was not sustainable.

The bottom line? Extreme diets don’t work. In order to be healthy and happy, you need to find a balance.

Love and Lunges – Is the Gym a Good Place to Meet Guys?

9 Exercises to Include in Your Muscle-Building Back Workout

Running Shoes In My Family Loved By Celebrities Too